The 2014 Special Olympics Ireland Games will take place in Limerick it was confirmed. The announcement was made at a gala event in the University Concert Hall, Limerick and comes after the successful staging of the same event in the city in 2010.

At the announcement with Keith Wood are from left: Ann Brennan, Roscommon, Lorraine Hessin, Galway and Carina Lally, Galway.

The Games will take place over four days from Thursday, June 12th to Sunday June 15th. In what will be one of the largest and most prestigious sporting events to take place in Ireland next year, 1,500 Special Olympics athletes from throughout the island of Ireland will travel to Limerick. They will be accompanied by 500 coaches and official delegates as well as a contingent of over 3,000 family members. The Games will be supported by a team of 3,000 volunteers who will be recruited from Limerick city, county and beyond over the coming months.
.
. Pic Sean Curtin.
Sean Curtin 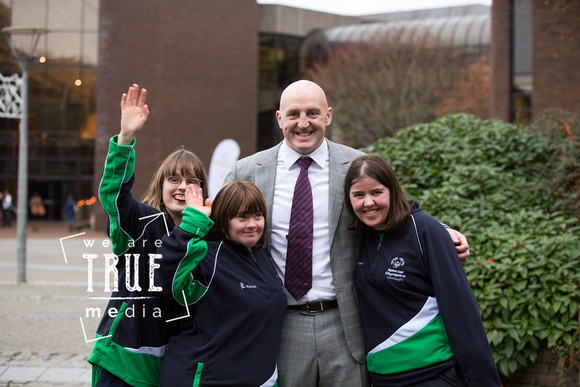